Obtaining U.S. Citizenship is a much slower process under Trump 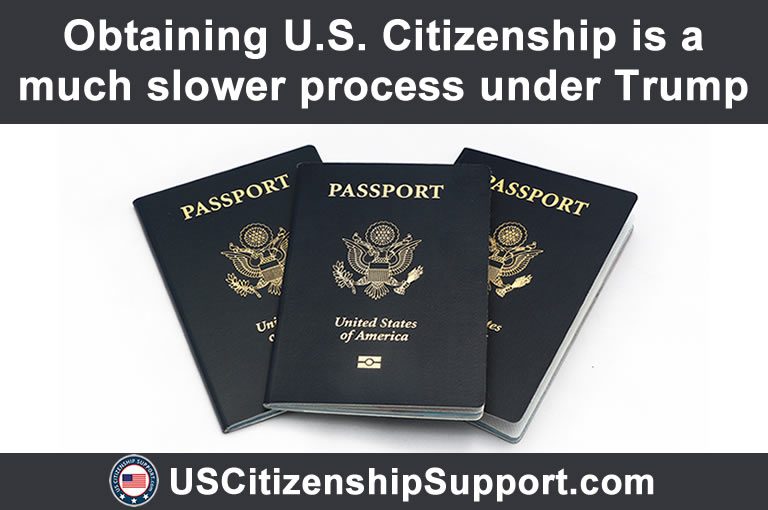 Processing immigration applications has slowed down significantly since the Trump Administration took office. It seems that the USCIS – United States Citizenship and Immigration Services, the agency that reviews the applications, is putting more resources into immigration enforcement rather than processing citizenship applications.

The approach the USCIS is currently taking towards legal immigration goes against the agency’s original mandate. Its clearly defined priorities were to eliminate application backlogs—and prevent future delays. Its purpose was to provide immigration benefits to customers; as opposed to functioning like an enforcement agency.

But it’s a new era, a new president. USCIS processing delays and application backlogs are having a devastating impact on the legal immigration system. New security protocols such as in-person interviews with employment-based green card applicants and a revamp of the refugee program is dragging out processing times. As a result, this is having a negative effect on families and employers nationwide. Families struggle to pay the bills, survivors of violence and torture face danger, and U.S. companies fall behind.

The federal agency blamed the delays on a steep rise in applications.

According to an analysis by the American Immigration Lawyers Association (AILA), from Fiscal Year 2017 to 2018, processing times had increased by 19 percent even though receipts of new applications had declined 17 percent. So the delays cannot be reasonably blamed on rising workload.

Why do people realize more than ever the importance of attaining U.S. citizenship?

Since the administration has been tightening restrictions on immigration, many long-term residents have woken up to the importance of obtaining citizenship. They realize that a green card is not sufficient to protect them from deportation and they feel compelled to cast a vote in the 2020 election.

Obtaining citizenship makes people feel more secure, connected to the community and like they belong in the U.S.

Citizens have better access to job and career opportunities, can vote and have a say in the government process.

How can we help you in the process of becoming a U.S. citizen?

It is essential that you pass the test to become a U.S. citizen. You must take this test very seriously, as failing it could result in being denied naturalization.

The test has two parts: an English Test and a Civics Test. The English Test contains a Speaking and Understanding Test, a Reading Test as well as a Writing Test. The Civics test portion is about your knowledge of U.S. Government, U.S. Geography, U.S. History, U.S. Holidays and U.S. Symbols.

We offer a free and complete online training for the U.S. Citizenship Test, so if you are in the process of becoming a U.S. citizen, please view our website USCitizenshipSupport.com